It was a fine day for shooting on Sunday last at the Guyana National Stadium, Providence where Archery Guyana ran off their 2021 National Outdoor Championships sponsored by Seven Seas. The competition commenced a few weeks ago at the same venue but due to very heavy rains, it was forced to be postponed. This gave athletes the opportunity for some extra training, and saw several new entries into the Women’s Recurve and Barebow divisions, as well as the Men’s Barebow division thereby adding to the competitive spirit.

Once the 30-metre field of play was set up by the Competitions Committee under inspection of the Chairman of Judges, Mr. Mohamed Gamal Khan and the Director of Shooting, Mr. Ryan McKinnon, the athletes were given time to get some practice shots and get sighted-in on the targets before the start of the competition.

Director of Sport, Mr. Steve Ninvalle was on hand to deliver the feature remarks at the opening ceremony, in which he promised support of the sport of archery and wished the archers good luck in the competition. Vote of thanks were delivered by Archery Guyana’s President Mr. Mohamed Khan and the Competition was declared open.

Action got underway with the Women’s Recurve qualification match which saw Theresa Jaikishun emerge in the top spot followed by Shereeda Yusuf, Roshini Boodhoo, Vidushi Persaud McKinnon and Elizabeth Mason, and Men’s Barebow qualification match with Jewanram Persaud topping the rankings followed by Nicholas Hing, Kenrick Cheeks, Robert Singh, Fabian Ramdatt and Saeed Karim. The ranking rounds continued with the Women Barebow and Men Recurve as the ladies fought hard for the top spots in the barebow division. Theresa Jaikishun topped the rankings again followed by Roshini Boodhoo and Elizabeth Mason. In match-play Jaikishun advanced to the finals as Mason and Boodhoo battled it out to challenge Jaikishun for the gold. Boodhoo knocked out Mason to advance, but Jaikishun took home the gold Boodhoo and Mason taking silver and bronze respectively.

In the match-play of the Women’s Recurve, Yusuf came up against Persaud-McKinnon and Boodhoo against Mason as Jaikishun advanced to the final. Yusuf and Boodhoo emerged the winners with their 6 set points each and then had to got up against each other in the semi-final. Yusuf beat Boodhoo to advance to the final against Jaikishun who emerged victorious against Yusuf in the gold medal match.

In the Men’s Recurve division, the top ranked qualifiers Jeewanram Persaud, Umasankar Madray, Robert Singh and Fabian Ramdatt battled it out in the gold, silver and bronze medal match play. In the match between Singh and Persaud both archers were evenly matched in set points and went into a shoot-off and Singh was judged the winner with his arrow closest to centre in the target. This gave Persaud in the Bronze, as Ramdatt was beaten out by Madray. The gold medal match resulted in Madray beating out Singh for the gold and gave the silver to Singh.

There was also a separate target set up off the side of the field of play for spectators and members of the public to experience the sport of Archery. It was encouraging to see Vice-President, Mr. Anand Raghunauth lead a number of the Guyana Chess Federation members together with family members to enjoy some target practice.

The competition concluded with the Medal ceremony presided over by the Chairman of Judges and Director of Shooting. Seven Seas Representative, Ms. Stacy Sam was present to also award special prizes to the winners of their products.

The official Results were as follows:

Thanks are expressed by Archery Guyana to Seven Seas for their continued collaboration as a competition sponsor. Special Thanks to the Management of Massy Distribution (Guyana) Inc., Seven Seas and Oasis Water Sponsor, Guyana Beverages Inc. and its management as we move forward to promote the sport of Archery in Guyana.

The Board of Directors also wish to extend thanks to the Minister of Culture, Youth & Sport, the Honourable Mr. Charles Ramson Jnr. and the General Manager of the National Stadium, Mr. Azad Ibrahim for making the venue possible and look forward to future events, local, regional and international, being hosted on the prestigious grounds. 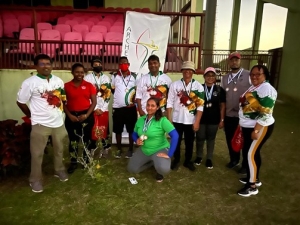 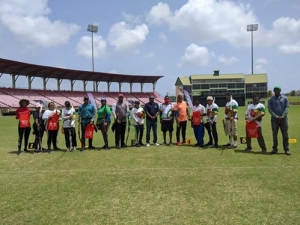 The competitors and officials line up for a photo op with Director of Sport Steve Ninvalle. 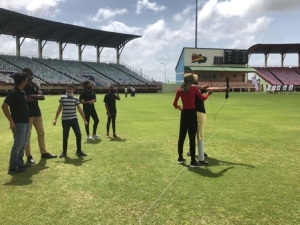 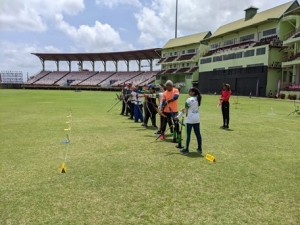