Archery Guyana Head Coach Nicholas Hing on Thursday, August 12, presented to Nations Director Pamela O’Toole at a small ceremony in the school’s compound, ‘School of the Nations Archers’, their official certificate of registration and affiliation together with a bow and arrow set.

An excited Pamela O’Toole expressed her joy and enthusiasm at having the opportunity to introduce and develop this new sport to the students together with Archery Guyana whom she thanked for providing the opportunity. She was also delighted to have the school be registered as the first ever archery club in Guyana, and looks forward to many competitions with other school clubs. She also thanked Ms. Whyte and Mr. Kenrick Cheeks, the school’s Physical Education teacher, who has already begun learning the fundamentals of the sport for taking the lead to bring the sport into the school. She also thanked Archery Guyana for its commitment to training the instructors.

Archery Guyana has been working to introduce the sport of archery into schools for some time now and hopes that School of the Nations is the first of many school clubs. Archery Guyana envision developing the sport within the school environment with the aim of discovering and encouraging athletes from the primary levels all the way to the university levels. Thereby ensuring the widest possible participation in its effort to find the best Archer to represent Guyana Internationally and specifically in the Olympic games. Archery Guyana commits to providing the necessary training for instructors and certified coaches, both junior and senior. With this in mind, Archery Guyana sees archery as an additional event at school sports; Inter-house, Inter-schools and Nationals, thereby fostering a competitive spirit among students and the camaraderie that archery is internationally known for. 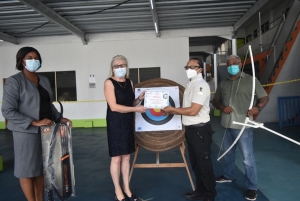 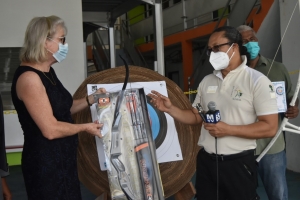 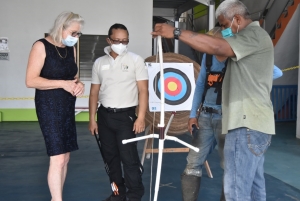 Caption: Hing explaining to Mrs O’ Toole about a simple version of an Olympic-style PVC bow which can be locally produced to get students started. Kenrick Cheeks is seen holding the bow 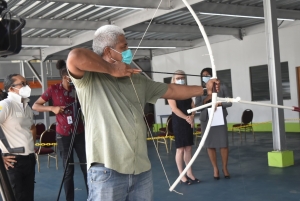